Each householder was required to complete a census schedule giving the address of the household, the names, ages, sex, occupations and places of birth of each individual residing in his or her accommodation. In 1851, householders were asked to give more precise details of the places of birth of each resident, to state their relationship to him or her, marital status and the nature of any disabilities from which they may have suffered.

In 1891, householders were asked how many rooms (if less then five) their family occupied and additional occupational data was collected.

Search the 1891 Census for your ancestors.

US saves millions on census

The U.S. government has saved 5 million dollars for the 1890 census by using Herman Hollerith's new 'punch card' machine, made by the Western Electric Company. The counting took about three months to process instead of the expected time of two years if counting had been done by hand.

Canada, Norway and Austria were quick to follow and the machine was used to process their 1891 census. Meanwhile, at home here in the UK, it's business as usual.

Early in the 1890s, fashion discovers a new toy - sleeves. Their upper half is puffed, while the lower is tight, or they gradually taper towards the wrist. Hats were also popular.

The Great Blizzard of 1891 in the south and west of England leads to extensive snow drifts and powerful storms off the south coast, with 14 ships sunk and approximately 220 deaths attributed to the weather conditions.

SS Utopia was a transatlantic passenger steamship built in 1874 by Robert Duncan & Co of Glasgow. On the 17th March 1891, the ship reached anchor in Gibralter and collided with another ship, HMS Anson. A five-metre hole was torn in SS Utopia's hull, and her holds were quickly flooded. The ship suddenly listed, destroying the lifeboats, and sunk within twenty minutes. 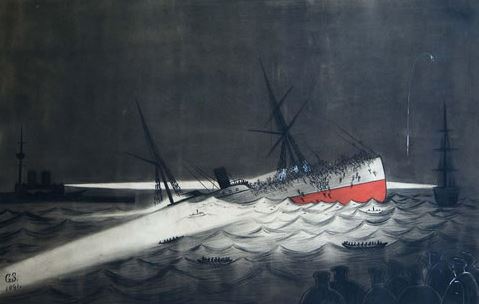 A sketch by a witness - the sinking of SS Utopia