Each householder was required to complete a census schedule giving the address of the household, the names, ages, sex, occupations and places of birth of each individual residing in his or her accommodation.

Search the 1881 Census for your ancestors.

Portrait of a Lady

The Portrait of a Lady is a novel by Henry James, first published as a book in 1881. The most interesting aspect of the work, observed literary critic Harold Bloom, is of the novel being James’ portrait of himself as a woman.

With the inevitable exceptions, The Portrait of a Lady has been the subject of critical acclaim since its first publication, and it remains the most popular of James' longer fictions. Contemporary critics recognized that James had pushed the analysis of human consciousness and motivation to new levels.

The birth of modern medicine

Sir Alexander Fleming, born on 6th August 1881, was a Scottish biologist and pharmacologist. Fleming published many articles on bacteriology, immunology and chemotherapy. His best-known achievements are the discovery of the enzyme lysozyme in 1923 and the antibiotic substance penicillin from the fungus Penicillium notatum in 1928, for which he shared the Nobel Prize in Physiology or Medicine in 1945 with Howard Walter Florey and Ernst Boris Chain. Fleming's accidental discovery and isolation of penicillin in September 1928 marks the start of modern antibiotics.

Originating from collections within the British Museum, the landmark Alfred Waterhouse building was built and opened by 1881. The museum is home to life and earth science specimens comprising some 70 million items within five main collections: Botany, Entomology, Mineralogy, Palaeontology and Zoology. Given the age of the institution, many of the collections have great historical as well as scientific value, such as specimens collected by Darwin. 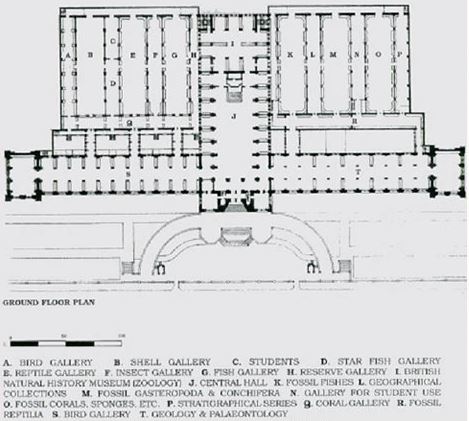 1881 Plans for the Natural History Museum