Each householder was required to complete a census schedule giving the address of the household, the names, ages, sex, occupations and places of birth of each individual residing in his or her accommodation. From 1851, householders were asked to give more precise details of the places of birth of each resident, to state their relationships to him or her, marital status and the nature of any disabilities from which they may have suffered.

Search the 1871 Census for your ancestors.

The bustle, a steel contraption that makes the skirt stand out behind, has become the cornerstone on which women's dress depends.

The full-length bustles are cumbersome to sit in as well as carry and control while walking.

Decoration, swathing the lower reaches of a woman's body in numerous ruffles and pleats, emphasizes the movements of that body part to heroic proportions. Light materials and light colours (using the new and vibrant aniline dyes) are in. 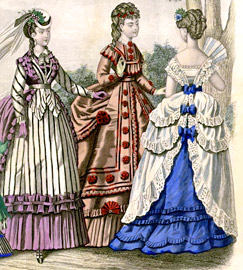 'Through the Looking Glass', the sequel to the popular 'Alice's Adventures in Wonderland', has been published. The author, Lewis Carroll, has used much different imagery than in the previous novel. It is almost a mirror image of the first book, drawing on opposites rather than similarities.

Prince Albert's vision to create an area in London dedicated to the Arts & Sciences' has finally come to fruition. The Royal Albert Hall of Arts and Sciences official opening ceremony took place on 29th March 1871. 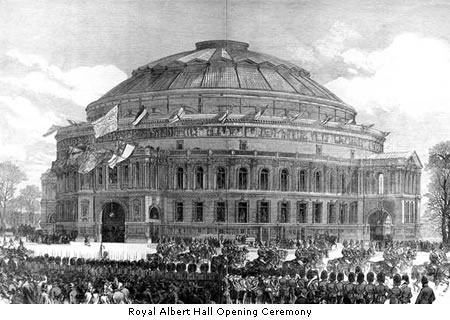 After a welcoming speech by the Prince of Wales, Queen Victoria was too emotional to speak, so the Prince had to announce that "The Queen declares this Hall is now open".

Since 1870 Voluntary Schools have declined in number (except Roman Catholic Schools) because Board Schools provide better buildings and higher pay for teachers.

The Education Act of 1870, also known as the "Forster Act", has given rise to a national system of state education and also assured the existence of a dual system - voluntary denominational schools and non-denominational state schools. The act has established elementary schools nationwide to supplement those already run by the churches, private individuals and guilds. School Boards have been elected to raise sufficient funds to maintain the schools in areas of the country where there was inadequate provision.