The 1841 census is considered to be the first modern UK census. Each householder was required to complete a census schedule which contained the household address and the names, ages, sexes, occupations and places of birth of each individual living at the address.

The information was recorded on pre-printed census schedules, which were left with a household before later being collected by the enumerator. If there was no one in the house who could write, the enumerator helped to record the information.

Search the 1841 Census for your ancestors.

The total number of letters posted has more than doubled since 1839, with a total of 168 million letters sent in 1840. The uniform postage rate of one penny, introduced in January 1840, has been a huge success.

Rowland Hill's idea to use a specially designed adhesive label to pre-pay the postage has proved to be a stroke of genius. Before this was introduced, letters that were not pre-paid had to be personally delivered so the letter carriers could collect the money from the recipient.

In 1841, the colour was changed from black to red (known as the 'Penny Red') because of difficulty in seeing a cancellation mark on the Penny Black; a black cancel was readily visible on a Penny Red. 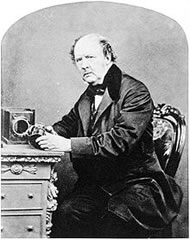 In September 1840, W.H. Fox Talbot discovered the phenomenon of the latent image. It is said that this was a chance discovery, when he attempted to re-sensitize some paper which had failed to work in previous experiments; as the chemical was applied, an image, previously invisible, began to appear.

This major breakthrough led to drastically lowered exposure times - from one hour or so to 1-3 minutes. Talbot called the improved version the calotype. He patented his invention on 8 February 1841 and asked large sums of money for the rights to use his process. This move played into the hands of M. Daguerre, the inventor of the popular daguerreotype process. 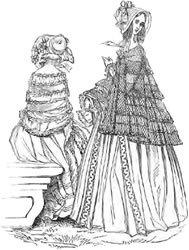 Bonnets in pale blues and greens are most in vogue this season.

For evening dresses, silks are proving popular, and trimmings to the bottom of the dress are waning.

Shawls will give place to an endless variety of scarves, those of Louis XIII being especial favourites.